Homebrewers help preserve Heritage Hops and it’s all down to the old adage of either ‘use it or loose it’.  Any rare breeds are best preserved by actually using them, to have no practical use puts them in danger of petering out until finally becoming defunct; likewise with Heritage Hops. I wanted to grow British Heritage Hop varieties but the reality is that homebrewers help preserve heritage hops and they are doing this simply by using these hops. It’s respect for the little brewers. 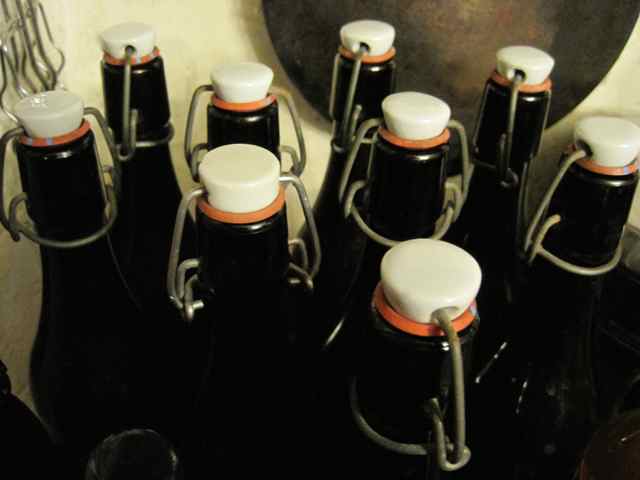 Home brewing has sometimes suffered a bad reputation, I certainly remember some pretty grim results made during our teenage experiments.  However today there is a large community of very serious home brewers who are brewing some seriously good beers. It’s worth remembering that many of our top national brewers started out home brewing.

A Bushel of Hops launched in 2015 specifically to grow hops for home brewers; in reality the seed for this idea had lain dormant for many many years.  But as I wanted to grow limited amounts of several different hop varieties, in particular the older British heritage ones, small brewers were natural partners for this venture.  I was reliably informed that being such a small grower I would be able to do things that larger growers could not and wouldn’t want to do.  There is a lot more fiddling around at harvest with small amounts and that is very time consuming.  Also labelling takes on a whole new priority, labels are the only thing that make me obsessively neurotic! 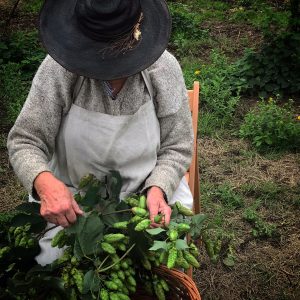 I don’t want to brew but I love to grow hops, my the main objective is to keep these varieties available for today’s brewers to try, our relationship is symbiotic. My other objective was to supply fresh hops from a current season only and by supplying direct from hop garden to brewer the provenance is guaranteed.  I know each hop variety and exactly where they are grown.  Each year some varieties do well, for no particular reason they will shine above a variety growing right next to them!  Not unlike different fruit trees which crop variably over different years within a mixed orchard.  I try to involve home brewers in this side of growing hops so they know which varieties have done better and look good or which have faired not quite so well and why.  It could perhaps be wind damage which has become more common in recent years, I feel it is part of the provenance and their participation when they purchase hops.

A Bushel of Hops evolved, there was never a set business plan so along the way so I have been on a journey too. 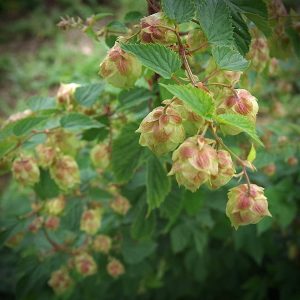 One of the greatest pleasures each year is receiving feedback,  beers that have been outstanding and some styles that have not worked out as well with a particular.  I think this information sharing is important as some these hop varieties have not been brewed for many decades and as these heritage varieties are discussed in brewing clubs, on Forums they become better known. Nonsuch is a good example, this has had several very positive comments and one from far afield, on Jim’s Forum. This is precisely how homebrewers help preserve heritage hops.

If your partner is a brewer and brewing is not your thing, you may fancy swimming in beer at the 700 year old Starkenberger Brewery in Austria once Covid restrictions are relaxed!  Cleopatra bathed in sour milk, some folk had even more bizarre habits! if you choose a warm beer tub, probably best not to drive afterwards!