Dr Susan Flavin’s studies in Experimental Archeology led her to this research of 16th Century beer.   The FoodCult Project  began when she was researching the 16th Century diet in Ireland pre the introduction of potatoes.  You can listen to a Podcast by Associate Prof in History Dr Susan Flavin about her unique take on studying history by exploring what we ate and drank during the 16th century.  The Podcast is easy to listen to and their diet in 16th Century included a lot of beer! 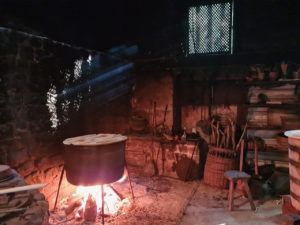 We know that historically beer has always been closely linked with the ordinary working person’s diet.  For generations brewing was mainly done in the home, it was a basic skill any housewife worth her salt required. On larger estates it is quite likely that brewing was done by specially appointed farm hands. Research into beers and ales in past centuries shows that beer was often drunk in copious quantities, allegedly a manual worker could be given up to 14 pints per day!  Beer continued to be drunk by farm workers in the first half of 1900’s on this Sussex farm. Joe Eyres, the hop drier and cowman,  told me that they drank beer daily; tea was a luxury reserved for Sundays. 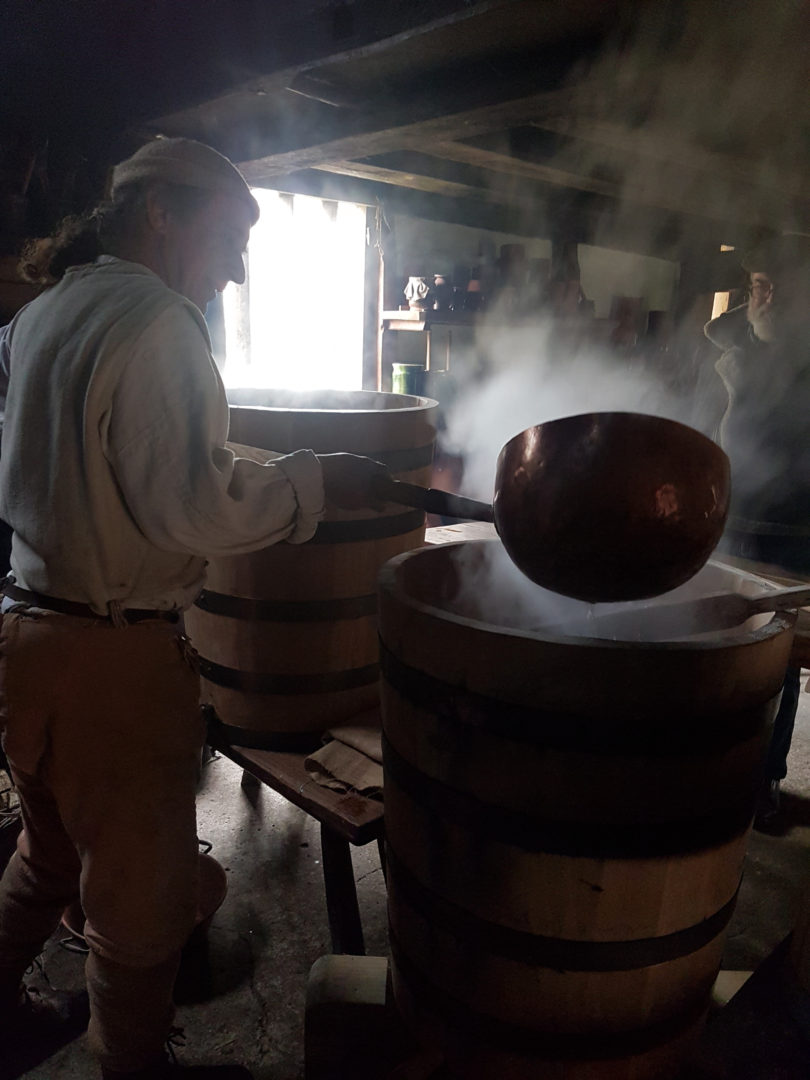 The aim of this project was to recreate a 16th century Tudor beer. What better way than by using , techniques and recipes found on historic records and various old household accounts.  And where better for this to take place than at the Wealden and Downland Museum,  one of my all time favourite places to visit.

The Foodcult project has been a major collaboration of many people, from historians to archaeologists, all experts in their own individual and diverse fields.  Artisan brewing equipment  was made to replicate what the Tudors would have used

The food historian Marc Meltonville had the crucial role as brewer. 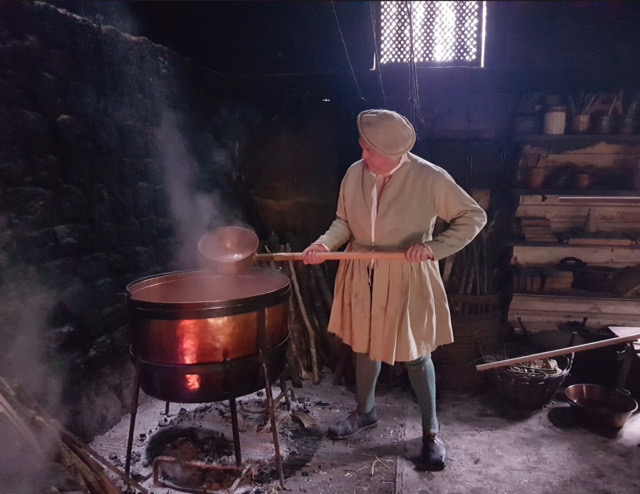 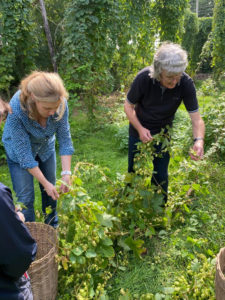 Selecting the right ingredients was essential. Tolhurst hop variety was chosen as closest to the original Flemish Red Bine. This Red Bine is believed to have been brought to England from Flanders at the end of 15th Century.  The Heritage Tolhurst hop variety was chosen by Dr Peter Darby for this experiment, as the best hop to replicate what was available for 16th century brewing.  Except for the National Collection, A Bushel of Hops is the only grower currently offering this Heritage Hop variety to home brewers.  There should be some available next season for anyone who wishes to brew their very own ancient beer.

The other vital ingredient was malt and here the ancient Bere barley was singled out. 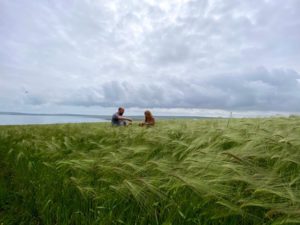 Bere Barley has been grown in Orkney for over 1000 years, it was probably introduced by the Vikings.

The three magic ingredients, water, barley and hops.  Bere barely for the malt, Tolhurst hop variety was chosen, water and this historical brew was ready to go, finally after almost 3 years of droughts and a global pandemic which had all conspired to delay original plans! The brewing took place at   Tindalls Cottage  and like any good reenactment Tudor costumes and accurately crafted brewing equipments were used.

On 15th September 2021 everything was in place.  A trial run to test equipment had been made in 2020 but in September 2021 it was the real deal. Film crew stationed then it was all systems go – brewing and filming were finally underway. 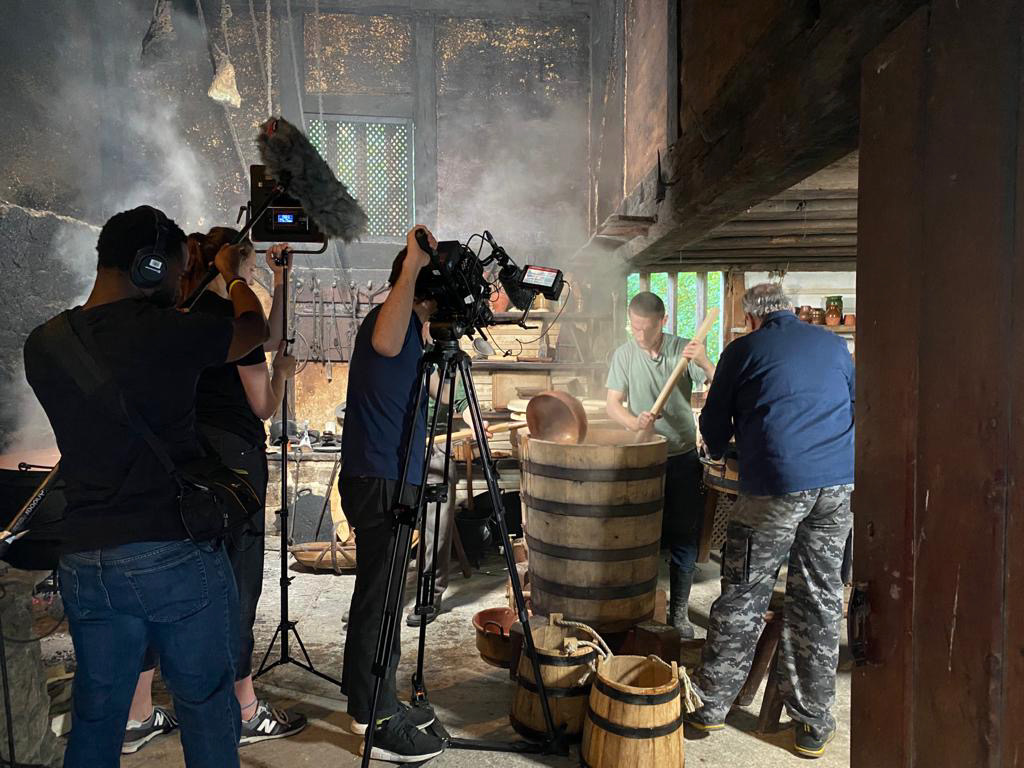 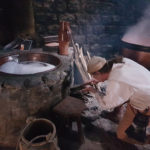 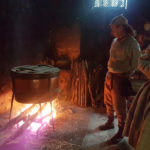 been a privilege.  At present the resultant beer   is undergoing analysis and Isotope testing.  Meanwhile along with everyone else involved, I am eagerly awaiting the final results, just for now many questions still remain unanswered. So after Tolhurst hop variety was chosen, was this 16th Century beer a flop or was it fit for a Tudor king?

For further reading – Martyn Cornell of the Historic Brewery Society has written this excellent article.  Apparently Shakespeare who was born in 16th Century ‘was a fan of ale, but didn’t much like beer.’