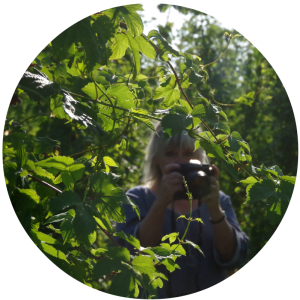 Dorothy Hollamby is a farmer’s wife and has always been involved in the family hop farm.

In 1973 Dorothy started up her own small scale farming enterprise which has evolved over the years.

Dorothy’s hobbies and interests have always been centred around her family, home & the countryside. She enjoys photography, sewing and cooking; all of which she will share snippets of through the news section of this website.

Dorothy’s interest in photography and the countryside lead her to rural photo journalism and she has had several articles included in the following publications:

October 2004 – Home is where the hearth is (Sussex Blacksmith)

November 2004 use photographs of pole lather turning for their study journal ‘Rural Crafts, Today and Tomorrow”

September 2005 – Hop for the Future ( photography for hop picking )

Dorothy’s published works also includes the photography for Pooks Hill Stonemason and Honeybrook Organic Farm brochures and advertising (sadly they have since gone out of business).

Please respect that all images within this site are copyrighted to Dorothy Hollamby at A Bushel of Hops and should not be used without prior consent. Should you be interested in using any of Dorothy’s photographs, please drop her a line via the contact form below to discuss terms.